What are your favourite catch wrestling holds and why?

What are your favourite catch wrestling holds and why? 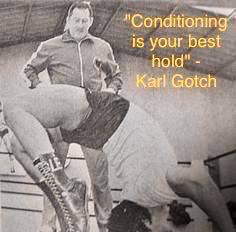 I have to agree with the legend Mr Karl Gotch here, when asked what is the greatest wrestling hold he would always answer, “conditioning.” After all if you do not posses the necessary athleticism then how are you going to apply any holds against another wrestler who is intent on tearing off your limbs or smashing you onto your back.

So firstly I have to say conditioning is by far the most important of all the techniques you will ever learn. I’ve heard stories that back in the day old timers would refuse to coach you any catch wrestling techniques until you reached a high level of fitness.

Would be wrestlers had to do five hundred hindu squats and two hundred and fifty hindu press ups as an entry test before progressing to actual wrestling. When training with old timers here in England I’ve had to endure some hellacious conditioning sessions, many would last for over four hours and include a lot of body weight exercises such as burpee, Indian push ups, Indian squats, Japanese squats, hundreds of sprawls, running while carrying your partner on your back, tons of circuits, bear crawls, crab walks, cart wheels and so on. After a couple of hours we would then break into drilling lots of throws and takedowns,cross buttocks, flying mares, half alches, double legs, single legs, high crotches etc.

We would then practice mat wrestling, lots of laps of the mat sitting out, then we would do more with a partner on our backs. This mat wrestling would be followed by situation wrestling that included starting from cross faces where your partner had one elbow dug into your rhomboid.

The session would end with actual matches under catch wrestling rules, by this stage all of us wrestlers would be at the point of complete exhaustion and a trickle of wrestlers would enter who had not endured the previous three hours of torture. The prize for submitting or pinning your opponent was another match without any rest against a new opponent. There was only one or at the most two matches occurring at a time so all eyes would be on the men wrestling. This kind of training develops character, resilience and mental fortitude.

I remember the week before competing in an international bout in Los Angeles I stayed in the middle for over an hour wrestling fresh opponents, win lose of draw I stayed on the mat. I can remember another heavyweight who was an MMA fighter and I going at it time after time, smashing against the walls and the huge metal radiator, smashing one anthers heads with open palms the old sadistic coach would keep a straight face and say, “Carry On!!” In retrospect this was not a good idea a couple of days before having to fly from Manchester to Philadelphia to Los Angeles. My body was in a lot of pain sat on the plane nursing injuries sustained in a crazy four hour session. Would I change things? Of course not. Stepping on the mat injured is a part of being a competitor. Show me a catch wrestler stepping on the mat to compete who is carrying no injuries and I will show you a man who has not trained hard enough. As my Sambo and Greco Roman coach Georgie Georgiev says “Hard work always pays off” .

My favourite actual catch wrestling holds do change from time to time though I do utilise the half alch a lot, this leads into a myriad of finishing hold chains. I used to often utilise the famous catch wrestling hold the Lancashire Grovit. The grovit is a brutal neck crank that twists on the head and neck of your opponent. This hold causes extreme pain as well as serious injury. I showed the grovit to my friend Chris Mosley, Chris is one of the worlds greatest sports physical therapists and works as a premier league head physiotherapist and is one of the main reasons I am still on the mat training and competing, Chris looked at me with stunned disbelief as I put the grovit onto my friend in his clinic and asked what injuries this beautify brutal old school finishing hold would cause.

He went on to explain as well as causing serious injury to the neck the grovit would also do serious damage to the body’s nervous system.

I like to seek advice from high level sports physics or consultant specialists who treat injuries on a daily basis as their expertise on healing the human body and understanding just how the body works as this aids me on knowing how best to manipulate the body when applying finishing holds.

I must add that I am not a sadistic savage by any stretch of the imagination though I am in fact fanatical about learning and mastering my craft. The art of physical chess must be studied, practiced and approached with an almost manic obsession in order to reach a decent level of competence and understanding.

Catch wrestling is super technical and requires a deep understanding of body mechanics. As I’m sat writing this my wife Heidi looked over and asked, “Chris, why are you growling?” I looked up and burst into fits of laughter, I must have been in the zone writing about the violent art. I blamed the muse and carried on writing.

Of late my highest percentage finishing holds when training have been toe holds, crooked head scissors, double wrist locks and ankle locks. I like to drill these techniques from numerous positions and angles, I also chain the holds together as I feel this fires my brains neural pathways when applying these moves during wrestling practice or actual competition.

I also take lots of notes and keep a training journal relation to all of my practices, lessons taken and lessons taught. I got into the habit of taking notes at the start of my grappling journey back in the dark days of pre YouTube.

As well as note taking I also take videos, I feel this is a tremendous help especially the day after taking a seminar or attending a training camp. I urge attendees of my seminars to do the same. After all these wrestlers are giving up their precious time, and hard earned money to train with me. I feel it is my job to ensure they retain the knowledge I pass on to them.

So there you go I hope I’ve answers this question adequately without digressing too much. As I mentioned conditioning is king, so commit and take pride in always being fit and strong. Please remember fitness wins fights and you can not go wrong with strong. When it comes to actual catch wrestling techniques I encourage you to experiment and learn what hold work best for you and also what works against different body types and against grapplers of various disciplines.

What works at the beginning of a match may not work at the end of a match when fatigued and both yourself and your opponent are drenched in sweat. I also find it helpful to concentrate on utilising your own strengths while capitalising on your enemies weak areas.

There you have it.. Stay in shape and remember you can’t go wrong with strong!!